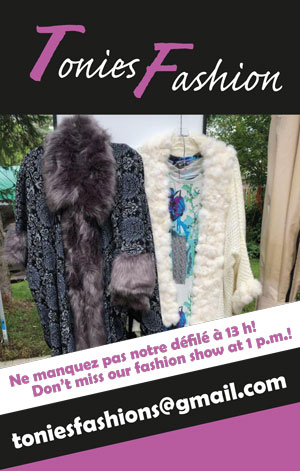 With Easter having come and gone, with Vs of Canada Geese honking overhead, and with snow melting, our long-awaited Spring season has arrived.

However, not all of Spring’s events are welcome. On April 16, CBC news warned us that forecasted rains could result in flooding as severe as in 2017. This year’s long winter deposited record snow in the Ottawa region and still-frozen ground plus deep snow in the woods means rain can’t be absorbed into the soil.

From Gatineau, Municipality of Pontiac through to the MRC Pontiac, residents who live alongside rivers are rightly concerned about flooding. In Gatineau on April 16, the City released information regarding how to prepare for flooding on its Facebook page. (Check it here: bit.ly/2KK3HKH)

There we can click on Ottawa River water level monitoring in live time. When I checked (at time of writing this column, Thursday April 18), the Ottawa River – Aylmer sector (Britannia Park) water level was at 58.95 metres. However, the water level is watched when it reaches 59.30 m, and there’s a risk of flooding at 59.42 metres. (Data as of April 18 at 04:35.)

The MoP’s Facebook page posted information concerning the potential flooding, providing a long list of villages and roads likely to be affected if flooding occurs on Easter weekend. (bit.ly/2KJhkdc)

Meanwhile, because I’m a member of the Lac Vert et Rivière Noire Cottage Association, I receive news of flooding up there, north of Waltham. On April 16, Fernand Roy (Director General) advised members: “The forecast calls for flooding of the Black River to the level of the 2017 height by Monday April 22nd. Inform everyone to leave before the flooding hits and they are stranded in that area because the Jim Lake access is not available because of all the snow.”

With all these dire warnings, Pontiac residents who live alongside watercourses have every reason to a) be very concerned; b) be as prepared as they can be; and c) be frustrated with what many feel is a lack of adequate support from various levels of government. Put yourself in their shoes and surely we can all be extremely empathetic.

What’s more, the Quebec government is reportedly trying to encourage property owners who live in flood zones to move permanently away from their homes (bit.ly/2IxbNUo). Now, such a suggestion may “seem prudent” in terms of saving repeated monetary compensations to residents, but the reality of the suggestion is extremely serious -- and totally alarming to any homeowner so affected. A staggering number of questions spring to mind. One is: How would such homeowners get adequately compensated and agree to move if their home is destroyed or damaged, where they are still paying a mortgage? This is merely one of an entire series of questions which immediately springs to my mind – and I’m not a property owner who’s affected.

Frankly, the stress related to home ownership and flooding would take an immense toll on anyone, as we can all understand. Seeing one’s beloved home flooded and being caught up in a bureaucratic nightmare isn’t anyone’s cup of tea and my heart goes out to everyone in this situation.

Is such snowfall and rainfall going to become the norm? Ought we here in our vast region – from westernmost Pontiac through to Gatineau and points east – expect spring’s floods to be dire?

Not one of us can answer that: Mother Nature isn’t predictable. I suggest it’s precisely this unpredictability that’s our new normal.

And, with a record heat predicted by some for summertime, another real concern to property owners is fire. This is particularly problematic because of all the ash, spruce and other species which are dying in the forests, creating fuel for wildfires.

Amid all the valid, deep concerns and stress related to floodwaters, we’re also experiencing Spring’s profound joys. The pussywillows are out. Great Blue Herons, Hooded Mergansers, Phoebes, Woodcocks, and other birds are returning to their northern breeding grounds. The fresh emerald green leaves of Marsh Marigolds are emerging at our pond’s edge…

Like most of you I bet, I welcome spring – yet I also hope floodwaters don’t damage people’s homes and lives.