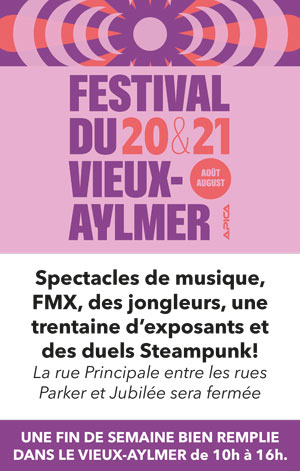 In 1934, for their musical Porgy and Bess, songwriters DuBose Heyward, along with George and Ira Gershwin, penned the tune “Summertime”. Popularized by blues singer Billie Holiday, Ella Fitzgerald and others, the beloved lyrics include this refrain:

Summertime, and the livin’ is easy

Fish are jumpin’ and the cotton is high

Oh, your daddy’s rich and your ma is good-lookin’

Ahhh, don’t we all wish the livin’ really could be easy for everyone?

Here in the Pontiac, the damage and ongoing emotional and economic difficulties created by this spring’s floodwaters are still being experienced by many residents bordering the Ottawa River.

When writing this column on Monday, July 8, I had cause to reflect upon the challenges flood survivors are still experiencing. While shopping in Shawville, I bumped into a friend who said her home was so badly damaged she’s spending about $500 daily on continual fixes, with no end in sight. Yet, she bravely said she’s fortunate. A neighbour of hers just installed a brand-new kitchen at considerable expense – and has lost everything.

The Quebec government hired cartographers to create a flood plain map to identify what areas along the Ottawa River are at risk from future inundations.

Recently, meetings were held in the Pontiac and Gatineau, where the new map was shown to the public. The map’s first draft left many shaking their heads because some places which regularly flood are apparently not identified as being at risk. Others which have never flooded and which are at a high elevation are within the red zone.

Regional mayors Joanne Labadie (Municipality of Pontiac), Gaston Allard (Fort Coulonge), and Gatineau’s Maxime Pedneaud-Jobin attended the meetings, as did many residents. All are alarmed at how the flood plain has been defined.

Fort Coulonge’s Mayor Allard assessed the government’s new map, exclaiming, “The cartographer should’ve been fired on the spot.” This is because he said 200 residences in the community have been identified as being in the flood zone. Considering the village is home to 1,500 people, he feels the new map would close down the village.

And it’s not “just” Pontiac villages which are now categorized as being inside the red flood zone: cities are also affected.

Gatineau Mayor Pedneaud-Jobin noted, “Some huge development projects that are absolutely valid, far from the flooding zone, would be stopped if they don’t change [the zoning].” The new Zibi construction at the Chaudière Falls is designated within this new red flood zone, as is a new condo development close to the Macdonald-Cartier Bridge in downtown Hull.

Adjustments must be made to the map, for sure. The Liberal MNA for the Pontiac, André Fortin, echoed many peoples’ thoughts when he called for another set of consultations to better define the flood plain.

He noted, “If it’s not done properly, it’s going to have a significant impact on the biggest investment that these people made in their lives.” He’s correct: generally speaking, housing is our largest single investment.

Indeed, last Thursday July 4, the Ministry of Municipal Affairs of Housing in Quebec announced that a new map will be created.

Quite apart from identifying red zones on a map, of course, there are many other issues to be dealt with, including how to reimburse people for damage. Indeed, some residents bordering the Ottawa River have not been compensated for the damage their homes sustained in the 2017 flood.

So: Summertime? Livin’ is easy?

So, as some of us enjoy this summer’s breezes and play in our region’s many beautiful lakes, rivers and streams, we must reflect upon our fellow citizens who have a different rapport with water. I can only hope that the molasses-slow machinations of every level of government eventually help them through their still-ongoing life crisis.

(Quotes from CBC article at bit.ly/2JlDLTa)